One of the keys to successful investing over the long term is the ability to determine what headlines are important to the markets and investment portfolios, and which are just market “noise.” The 3rd quarter of 2017 reminded us of the value of that skill.

Judging by the headlines, the 3rd quarter was a rough one. Three major hurricanes made landfall on US territory… threats of Nuclear War from North Korea’s Kim Jong Un were in the air… more than one terrorist attack occurred in Europe… and a huge data breach may have compromised over 140 million people’s personal information.

Economically, the Fed began the historic task of unwinding its trillion-dollar balance sheet and signaled that another rate hike is coming this year (likely in December).

Meanwhile, in Washington, gridlock remained as there was no discernable progress on healthcare or taxes.

Nevertheless, while these headlines kept investor sentiment in check, markets proved to be incredibly resilient. The 3rd quarter was indeed a strong one for the markets.

3rd Quarter Performance Review – A Strong Quarter Across the Board

Leading investment research firm Morningstar tracks a broad list of 147 global indexes on its website. Only five of those indexes showed negative returns for the 3rd quarter and just five (albeit, not the same five) were down year-to-date. A mere 3% of indexes, from all corners of the markets (bonds, stocks, and alternatives), posted a down quarter and year through 9/30/17.

In fixed income, all major bond categories recorded a modest bump in returns this past quarter. 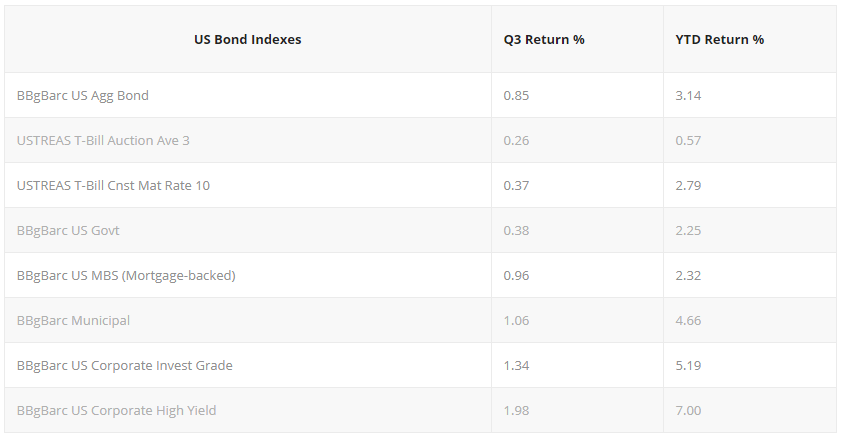 A growing number of retirees continue to bolster demand for income producing asset classes. Bond fund inflows exceeded a healthy $100 billion through the first nine months of the year. According to the Government Accountability Office, an estimated 9,900 Americans will turn 65 years old, each day in 2017. (This number is expected to swell to 11,500 in 2029.)

While bond investors should be pleased, earning future coupons could be more challenging with strengthening global GDP, inflation pressures, and central bank tightening all underway. And remember, beyond income, many investors hold bonds as portfolio protection for when the stock market tumbles.

Thankfully for equity investors, there have been no such signs of a market downturn. In the US, stocks of all sizes climbed higher.

It has not only been a great run for months and quarters, but the S&P 500 is on pace for its ninth consecutive year of positive returns, which would tie the longest streak on record (19911999). This current bull market is the second longest since 1950 for the widely followed benchmark. For greater perspective, the Russell 3000 – representing 98% of the investable US equity market – is up 355% since the stock market bottom in March 2009.

While technology stocks have blazed the trail for US stocks, emerging market stocks have been the driving force behind the performance of foreign equities. Emerging markets delivered robust returns in the 3rd quarter and lead all major asset classes in returns this year.

For emerging markets, the framework has been steady growth, modest inflation, a pickup in commodity prices, US dollar weakness, and continued momentum.

There’s also a domestic technology-consumption theme at play in emerging markets – mainly, in China, which is more of an “emerged” market. A massive and growing Chinese consumer class has gained – and will gain – access to smartphones, the internet, and online shopping. For example, just this year, China’s equivalent of the “FANG stocks” Alibaba, Tencent, and Baidu are up 97%, 82% and 51%, respectively. The world’s second largest economy represents 30% of the weighting in the MSCI Emerging Markets Index (24 countries, in total). China is up over 40% in 2017.

Many other emerging markets have also outperformed US markets this year. Brazil, Chile, India, Mexico, Peru, Poland, Korea, Thailand, and Taiwan – among others – are on that list. Several foreign developed markets, including Germany, Denmark, Netherlands, Italy, Sweden, Finland, and France, have outpaced the US, too.

Investors have become receptive to adding more of an international flavor to their investment portfolios. On average, foreign stocks have greater growth rates, higher dividend yields, and cheaper valuations than US stocks.

The list of market laggards is short; however, even some of the scant bottom feeders showed signs of life in the 3rd quarter.

Looking beyond just stocks and bonds, commodities reversed course over the last three months and posted modest gains in the 3rd quarter, driven by supply reduction in energy and potentially growing global demand. Strength in energy (especially oil) powered the gains in commodities, but the strength was also widespread. Brent Crude oil surged nearly 20% in Q3 – thanks to growing expectations of continued OPEC production cuts. This continues to be a supportive force in the energy markets. Additionally, we received a positive signal for global markets as China’s economic momentum, combined with growing evidence of a looming acceleration of
the global economy, buttressed double-digit percentage gains in industrial metals: copper, iron ore, and zinc. Finally, even precious metals ticked up (gold and silver up low-single digit percentages) thanks to geopolitical concerns (North Korea) and a slightly weaker US Dollar Index. Although, the outlook for precious metals going forward is more uncertain than most other assets.

Turning to currencies, the Dollar Index continued to decline, falling 2.2% in the 3rd quarter, in large part, due to moves by foreign central banks. Specifically, the European Central Bank announced it will reduce its QE program in 2018, while the Bank of England signaled it will raise interest rates for the first time in a decade.

Finally, looking at stock volatility, it continued to be a historically “calm” year in the markets. This year, only 5% of trading days have experienced a move in the S&P 500 of greater than 1% in either direction, which puts us on par with some of the least volatile markets in the last thirty years.

When will this bull market end? With such strong performance in 2017 and over the past several years, it’s a question we are constantly asking ourselves.

Happily, despite skeptical investor sentiment, the facts imply the answer is “not this year.”

The 4th quarter has traditionally been the best quarter of the year for the markets. Over the last 25 years (since 1992), the S&P 500 has gained an average of 4.9% over the final three months of the year. The October-November-December stretch has accounted for 54% of the index’s total return over the entire 25-year period. Also over that same period, 20 of the last 25 4th quarters (80%) have produced a gain.

Getting more specific, the focus of the financial media this quarter will be on tax cuts, and whether they become reality or fall victim to more Washington gridlock. That singular focus on tax cuts ignores the fact that this 2017 rally has been driven by positive, fundamental factors:

There is no reason to believe that either of those factors are going to suddenly disappear in the coming months. In fact, if anything, there are subtle hints that we could see acceleration of earnings growth and economic data in the 4th quarter.

Now, that’s not to say there are not risks to portfolios. There are always risks. This quarter the risks to watch closely are: tax cut disappointment, an uptick in geo-political tensions from North Korea or Iran, slowing economic growth in China, and a possible government shutdown.

However, an honest analysis of the probability of these risks isn’t high enough to warrant a major investment strategy change.

For several years, the financial media and experts galore have pronounced the end of this bull market (in both bonds and stocks). It is undoubtedly one of the most hated bull markets of alltime; however, with equity markets making new highs around the world on almost a weekly basis, global stocks could continue to ride their powerful momentum higher into the next quarter and beyond (earning season may be critical with high expectations and elevated valuations).

At CPK Wealth Management, we remain cautiously optimistic. While the general market set up remains positive, we are cognizant of the fact that markets are overdue for, at least, a shortterm pullback and, as always, the unnatural calm could change at a moment’s notice. That is why we’ve worked with you to establish a personal allocation target based on your financial position, risk tolerance, and investment timeline. Therefore, we choose to remain diversified, disciplined, and focused on longer-term goals.

Thank you for your continued confidence and trust. Please feel free to contact us with any questions, comments, or to schedule a portfolio review.