The 4th quarter of 2017 was one of the best quarters for stocks in years, as broad gains were driven by anticipation and passage of the Tax Cut and Reform Bill, acceleration in economic activity, and rising corporate earnings.

Looking back on the 4th quarter, one of the most important takeaways for investors is to appreciate that while tax cuts dominated headlines, stock gains in the 4th quarter (and most of 2017) were really supported by an accelerating economy and rising corporate earnings. Point being, while the anticipation of tax cuts got much of the credit for the rally in stocks over the past quarter and year, market performance was also driven by significantly upbeat economic data and improving corporate fundamentals.

That is an important distinction to keep in mind as we start 2018 because, while risks remain (as always), this rise in the market has been mostly driven by strong economic data and strong earnings. That implies the rally can continue even with tax cuts now behind us.

The markets continued to climb the proverbial “Wall of Worry” in the 4th quarter, as they did for all of 2017 – specifically, geo-political concerns in North Korea and Iran weighed on sentiment, but neither situation deteriorated enough to offset improving fundamentals.

In a similar way, there was some trepidation regarding Fed policy. The Federal Reserve embarked on the historic task of “unwinding” its balance sheet and executed another quarterpoint rate hike in December; however, clear communication by the Fed regarding these policies (neither were surprises to the markets) combined with underlying strong economic and corporate fundamentals ensured the Fed moves did not disrupt the rally in stocks.

For the year, US stocks were buoyed by strong economic data, rising corporate earnings, deregulation, the perceived safety of US assets, a rebound in oil prices, historically low interest rates, and low inflation. Underscoring the resiliency of the markets in 2017, the S&P 500 rose every month of the year, which is the first time that’s happened in history!

In the US, it was a remarkable quarter – and year – for the markets. By market capitalization, large-cap stocks outperformed mid- and small-cap stocks. From a style perspective, value stocks edged out growth stocks (a reversal from the first nine months of the year). Regarding sector performance, consumer discretionary, financials, and technology were the leaders, while health care, utilities, and telecom were the laggards (six of the S&P 500’s 11 sectors generated 20%-plus returns in 2017). Additionally, many of the trendiest internet-related companies had a strong 4th quarter and blowout year. For example, the “FANG” stocks (Facebook, Amazon, Netflix, and Google’s Alphabet) averaged returns of close to 10% for the quarter and near 50% for 2017.

Stepping back, 2017 continued what has been a historic run for US markets. As mentioned, the S&P 500 broke a record in 2017. The index booked positive gains in all 12 months. (It also has a current winning streak of 14 months in a row and nine straight quarters.)

Notably, the S&P 500 has delivered nine straight years of gains on a total return basis (The only other period that accomplished this feat – positive returns in nine consecutive years – was from 1991 to 1999). All major US equity indices also finished the year with strong double-digit returns.

Outside the US, the story was the same. The performance was actually better! Looking at the MSCI ACWI Index that is composed of 47 developed and emerging market countries, including the US, 32 countries posted higher returns than the US in 2017. In total, 44 of 46 foreign countries recorded gains in 2017 (the only two with negative returns were Pakistan and Qatar). 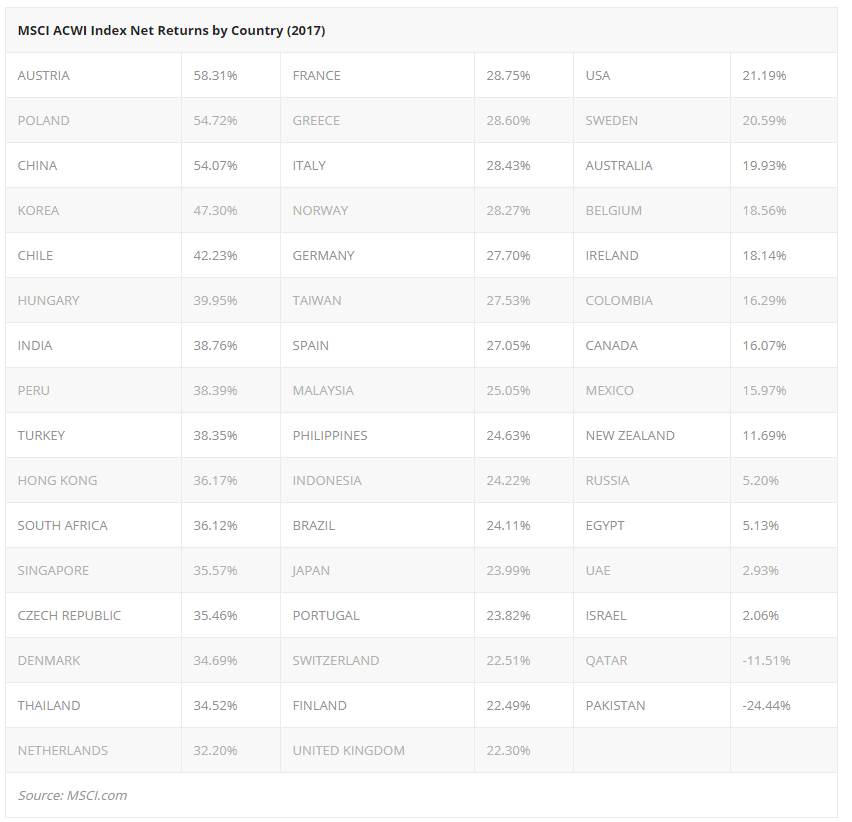 As a group, international stocks have outperformed domestic stocks over the last year, as gains were driven by strong growth in emerging markets. To start 2018, the outlook for international markets remains positive. Not only do foreign equity markets have momentum, they are also cheaper than US stocks based on multiple valuation metrics. Also lending a helping hand, the International Money Fund recently raised 2017 and 2018 global growth projections.

Overall, international equity returns were solid across the board for the past quarter and past year.

Turning to commodities, it was a mixed bag for the five, major commodity sub-sectors. After lagging for most of 2017, commodity markets rebounded during the 2nd half of 2017 as global economic growth began to accelerate. Energy fought back in the 4th quarter with the price of WTI crude oil finishing 2017 basically at the high for the year. An extension of production caps from OPEC and Russia and an expectation of greater global demand expedited oil’s move higher. Gold recorded a solid gain of 12.66% (LBMA Gold Price Index) in 2017 on the back of a weak US Dollar and low real interest rates.

Looking forward, the outlook for commodities is as constructive as it has been in years due to rising global demand.

Switching to the fixed income markets, almost all major bond categories inched higher in the 4th quarter. And despite the steady roster of bond pessimists, fixed income returns were, for the large part, satisfactory during the full year. The Bloomberg Barclays US Aggregate Bond Index, the leading benchmark for bonds comprised of investment grade government bonds, corporate bonds, and mortgage-related bonds, was up 3.54% in 2017.

Looking forward, we start 2018 again vigilant to a bond market decline. But, for now, bond markets remain resilient, thanks in part to demographics, as more investors transition from the accumulation to distribution phase (i.e., retirement). To that point, fixed income ETFs saw sizeable inflows of $23 billion in the 4th quarter and $127 billion over the trailing 12 months.

In summary, we acknowledge the bond bull market is mature, but there are still positive forces helping to support fixed income markets.

The market and economy stride into 2018 with a tailwind from the biggest tax overhaul in 30 years. While some of the benefits are arguably baked into current market prices, the aftermath will likely result in US corporations keeping more of the money they make. That extra cash can potentially be deployed in numerous stock positive ways: Increased capital expenditures, new growth initiatives, research and development, mergers and acquisitions, dividend increases, and stock buybacks are all on table for corporate America as we start 2018. This along with other positives, such as the continuation of robust corporate earnings, improving economic growth, unemployment near record lows, and high consumer confidence levels, make the outlook favorable for stocks as we start the new year.

While the Fed is on track to continue with gradual interest rate hikes in 2018 (three according to the latest Federal Open Market Committee projections), rates would still be low (2% to 2.25%), historically speaking.

Geo-politically, tension with North Korea, NAFTA renegotiations, and the possible reintroduction of sanctions against Iran could increase market volatility in 2018. In 2017, none of these events offset positive market fundamentals and it would likely take a serious deterioration in any of these situations to cause a material market pullback.

More broadly, there’s always the chance of a market correction and that’s no different this year — yet, bull markets traditionally end with economic recessions and inverted yield curves, neither of which are present or seem imminent right now.

At CPK Wealth Management, we remain optimistic, but are guarded. While the general market set up remains positive, we are cognizant of the fact that markets are due for, at least, a shortterm pullback and, the unnatural tranquility could change at a moment’s notice. We continue to believe investors should embrace broad diversification within various asset classes to position for further growth, while defending against uncertainty and risk. We have worked with you to establish a personal allocation target based on your financial position, risk tolerance, and investment timeline. Therefore, we aim to take a diversified and disciplined approach with a clear focus on longer-term goals.

Thank you for your ongoing confidence and trust. Please feel free to contact us with any questions, comments, or to schedule a portfolio review.